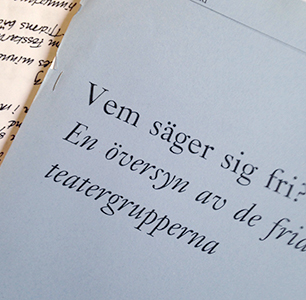 1995 -1999 I was member of the Swedish Arts Council‘s reference group for independent theatre groups (advising on applications for long term and project funding). As a result of the discussions we had, I did an analysis of the cultural policy and funding structure of indenpendent theatre groups, with suggestion of changes in 2000, commissioned by the Swedish Arts Council.