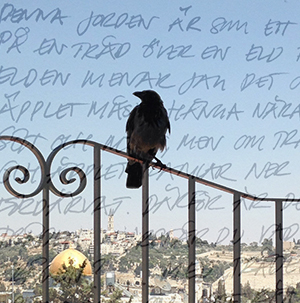 Late fall 1899 and spring 1900 the Swedish authors Selma Lagerlöf and Sophie Elkan travelled in the Middle East. A major focus for Lagerlöf was the town Jerusalem and the Swedish peasants from the small village Nås who hade immigrated to the American Colony there in 1896, in expectance of a Second Coming that never occurred.
The resulting novel Jerusalem, published in two parts 1902-1903 earned her an international breakthrough: part fiction, part documentary. In one chapter she repeatedly calls Jerusalem the “city that kills” – but what did she sense and intuit about the conflicts to come? What is made visible in the connections between now and then, between the small village Nås and Jerusalem of today?
Project together with visual artist Johan Widén, supported by The Swedish Arts Grants Committee. (2014-2018)

Parts of the work exhibited at the Alma Löv Museum of Unexpected Art  June 20 – Sept 2 2018, at the exhibition space at Dar-Al-Kalima University in Betlehem August 2019 and at AllArtNow in Stockholm February-March 2020.